Trump won the election so what do we need to do now?

I see a lot of people wandering what the hell has happened to the world. How could this happen? But not many talking with understanding about those who voted Brexit, voted extreme right in several countries in Europe and voted Trump. In summary, lots of people have felt for the last two to three decades that the political establishment has betrayed them, that neoliberalism has betrayed them.

People are doing it harder, in more precarious jobs and are, generally, impoversihed and more vulnerable. Jobs are lost, people go casual, part-time, get offered worse job conditions… etc. You know the drill. The trend has worsened since the GFC in 2008 (with its effects still ongoing, the GFC is not over) and the the only recipe the political establishment has offered in response is cuts, cuts and more cuts.

So people are giving a slap in the face to the political establishment, the neoliberal consensus that has been ruling the globalised world since the 1970s. Although, it’s also important to remember how people have voted and that the majority of the US citizens have actually not voted because, one must assume, they simply don’t feel represented or they just don’t care. Clearly, though, they chose not to be part of this election. 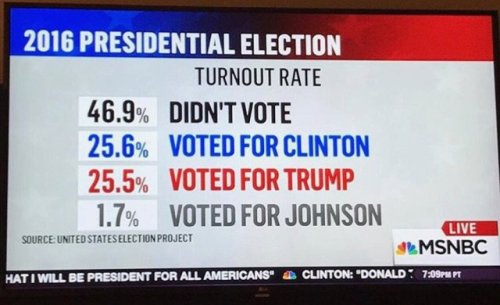 Trump’s monstrous views on women and latinos, his blatant xenophobia on immigrants and scaremongering on Islam, his ridiculous and outrageous ideas such as building a wall, have overshadowed everything else. There’s no denying that they’re important issues. We’ve gone, for example, from the first black president to one elected with the support of the Ku Kux Klan.

However, a lot of Trump’s agenda was barely reported. Here’s why he won, borrowing from Ignacio Ramonet:

All those points above make sense to US citizens in the forgotten states, away from the big cities, who have been most affected by the neoliberal policies of successive governments, both Democrats and Republican. Bernie Sanders, who interestingly shares some commonalities with Donald Trump’s agenda, warned everyone the Democrats would lose if they continued with business as usual.

Let me be very clear. In my view, Democrats will not retain the White House, will not regain the Senate, will not gain the House and will not be successful in dozens of governor’s races unless we run a campaign which generates excitement and momentum and which produces a huge voter turnout.

With all due respect, and I do not mean to insult anyone here, that will not happen with politics as usual. The same old, same old will not be successful.

The people of our country understand that — given the collapse of the American middle class and the grotesque level of income and wealth inequality we are experiencing — we do not need more establishment politics or establishment economics.

We need a political movement which is prepared to take on the billionaire class and create a government which represents all Americans, and not just corporate America and wealthy campaign donors.

In other words, we need a movement which takes on the economic and political establishment, not one which is part of it.

The Democrats party didn’t heed the warning. No one in the mainstream media was really interested.

Michael Moore has been warning for months that Donald Trump would win, but, again, a lot of people didn’t listen and the mainstream media continued with their own narrative that it was simply unthinkable.

There are two USAs. In the rust belt and southern states they knew they could win but no one was listening. In the cities, the liberal media, living in their own bubble, believed their own propaganda, they breathed their own air. And they believed that they would win. There was simply no chance that the ‘orange troll’ would win.

But history shows us that when people suffer and have had enough, they look for an alternative, they retaliate with a kick in the ass to the one who’s put them in that position. If we don’t build a credible alternative, with a social agenda, then right wing populists will win the day, as is happening already in Europe, in the USA and, yes, also in Australia.

I’ve always believed that another world is possible. That there are alternative to neoliberalism, individualism, consumerism, nationalism. Three main principles should be tackled for a realistic alternative that people would follow:

1. Real democracy. That is, a democracy that is more direct, participatory and accountable. It’s clear that people feel disenfranchised from the current political system. A considerable number of people simply do not feel like they are represented by the politicians who’ve been running the show for the last few decades. No political party represents their needs and serves them. The reasons for this are numerous but could be summarised in two: a) the perception that politicians serve business and corporates rather than the citizens who vote for them and b) the perception of a democratic deficit between what people want and what the political establishment and government do.

Here are some of the things that should be addressed:

If Iceland can imprison the bankers that brought their economy down and draft a new constitution with citizens involved, with all the meetings being streamed online and with daily feedback and amendments given by people through email and Facebook that are addressed at the start of the next meeting; surely, other countries can also make their democracy more direct and participatory.

2. Real economy. The real economy is gone and has been replaced by a speculative casino economy that only benefits a few whilst it creates high volatility and instability. The  implementation of a financial transaction tax is imperative. This tax would help bring a degree of stability to the world economy by imposing a tax on speculative financial transactions. Additionally, it would also collect large amounts of money that could be invested back into the real economy (the one that actually creates things and employs people) and onto the big challenges the world faces at the moment (poverty, global warming and the implementation of renewables, for example).

It is important that we ask why it is that only this speculative financial transactions, which move billions of dollars everyday are exempt from being taxed, when they are the most damaging to the world economy and are mostly responsible for the instability of the global economy? We are talking about speculative casino economics that do not produce anything of value and do not create jobs. A real economy instead is one that produces things of value and creates jobs.

Tied to this is the abolition of tax havens, which is an absolute must all around the world. In fact business, corporations and anyone using tax havens to divert and hide their wealth should be prosecuted. Through tax havens big corporations and financial institutions divert money so they don’t pay taxes. Tax havens rob nations benefitting only the wealthiest people. They should simply be abolished.

3. The right to live with dignity. The gap between rich and poor increased in the 1970s when neoliberal policies started to be implemented, picked up speed in the 1980s, and ballooned in the 1990s. Then came the GFC and inequality sky rocketed as the most of the wealthy actually came out better, whilst people defaulted on their homes and lost their jobs.

Similarly, in Australia, Prime Minister Bob Hawke began the import of neoliberalism policies into Australia and a nation that was often spoken of as an example of equality, or at the very least small differences in wealth within the society, suddenly became a nation of a few millionaires. Additionally, it is clear that some salaries are in the millions per year whilst others stall and are incredibly low.

Inequality is being entrenched, it’s getting worse and that causes deep instability in society. The climate and the environment are collapsing, island people have to abandon their homes as the sea rises and water scarcity is on the rise. If we don’t take drastic action, the climate will get out of hand and the consequences will be devastating for everyone, although, ironically, as it very often happens, the poorest and most vulnerable, those who have contributed less to the problem, will suffer the worst of it.

Every citizen of the world should have the right to live with dignity. The right to health, education, a home and a job with a decent wage and work conditions. The right to water and a habitable planet. If we don’t have that, and at the moment we clearly don’t, then we’re heading into disaster; an avoidable disaster.

I’m not the brightest mind, I’m not an expert in politics, or geopolitics, or economy. These are just some random thoughts, but I do believe that when politicians say there’s no alternative, it’s not true. When they present themselves as the only sensible option, or as representing common sense. It’s just bullshit, and it has to be called. It has to be fought.

With these three pillars a better alternative, in fact, a better world, could be created.

Another world is possible if we put our mind to it, if we identify the key problems and we address them with fresh ideas that put people and the environment before any monetary consideration.