Five years ago, the Basque terrorist group ETA declared a unilateral ceasefire and expressed the will to fully disarm. Many thought it wouldn’t last. After all, ETA had declared ceasefires before and then resumed putting bombs and killing. But, they declared that this was a unilateral and complete ceasefire without conditions. The feeling in the Basque Country was one of relief. At last, the end had come. Of course, some didn’t want to believe it but ETA stuck to their word. Still, I remained sceptical of much progress.

A group of international observers with ample experience in conflict resolution and peace talks (South Africa, Ireland and the Middle East) was assembled. Sadly, five years later, the Spanish government is still refusing to enter into any discussion about disarmament and the end of conflict.

As the group of international observers who are still trying to mediate the end of the conflict say, this is unprecedented. Here’s a terrorist group wanting to put an orderly end by fully disarming and the Spanish government is not only looking the other way but actively sabotaging the opportunity for peace. 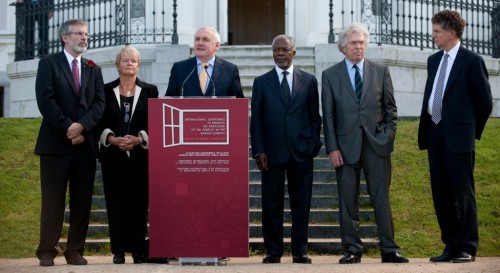 When will the political dialogue start? When will the Spanish government show any willingness to fully end the violent conflict? Or is it that they’re simply scared and refusing to see the end of ETA?

After all, if ETA is fully disarmed and out of the picture they would have to confront the big elephant in the room clearing its throat and saying: “Well, now that ETA is gone and fully disarmed, the armed conflict is over so should we talk about the political conflict?”

The political conflict is not going anywhere. The two most voted political parties in the recent Basque elections are the Basque Nationalist Party, and Bildu a coalition of left wing pro-independence groups. The third most voted was Podemos, a new Spanish political party that defends the right to decide and self determination by a referendum, similar to Quebec. Those three parties together received 73% of the vote, whereas the two Spanish political parties that are against any referendum or independence only received  22% of the vote.

Even though the armed conflict has ended, the political situation is far from over. The leader of Podemos in the Basque Country, a political party that didn’t even exist three years ago but received 14.86% of the vote, is Pilar Zabala, the sister of alleged ETA member Joxean Zabala.

Back in the 1980s, members of the Spanish police and government formed a terrorist group called GAL, with public funds and one must assume with full support from the government. They kidnapped Lasa and Zabala, two young men suspected of being ETA operatives. They took them to the palace of the Governor of Gipuzkoa. They tortured them for days, then took them to the south of Spain, pulled all their fingernails and toenails off and buried them under quicklime.

The GAL terrorist group, killed several people in the 80s and not just members of ETA. They killed civilians too. Pilar Zabala, as leader of Podemos in this election, was a stark reminder that violence and terrorism wasn’t just the domain of ETA, but also of the Spanish government and police. As she often says, and this is quite reminiscent of Animal Farm, there are many victims of this conflict, although only victims of ETA are officially recognised in Spain. As if victims of a state sponsored terrorist group are worth less, or don’t even count in comparison to victims of ETA.

Then there’s the case of Bildu, the second most voted party with 21.26% of the vote. They wanted Arnaldo Otegi as candidate for president but the Spanish courts didn’t let it happen. Otegi’s crime is bizarre to anyone living out of Spain but totally within the norm in Spain.

Back in the late 90s the Spanish courts decided to ban the pro-independence Basque political party Batasuna (this would be, the Basque Country’s equivalent of Sinn Fein). Batasuna’s crime, and that of its leaders, was to be left wing and pro-independence, like ETA. The party hadn’t committed any crime as such, but the idea that anything even remotely related to ETA, was ETA, became the norm in Spanish courts.

The Batasuna ban was followed by the shut down of two newspapers (one of them, the one and only newspaper wholly written in Basque), and the prosecution of several social organisations who’s only crime, again, was simply being left wing, Basque, and pro-independence. Hundreds of people were arrested, imprisoned, faced court and lost their jobs. 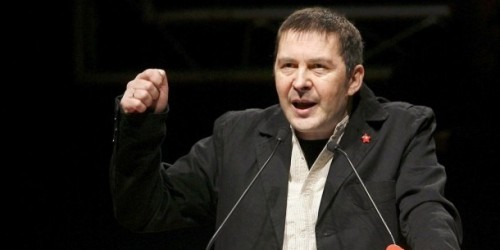 The leader of Batasuna was Otegi. He was sentenced to prison. When he came out, he continued to advocate with renewed force for the disappearance of ETA and a peace process along similar lines to Ireland. He steered Batasuna and the pro-independence movement towards a political fight. He advocated for ETA to cease their actions and disarm. He was sentenced to ten years of prison for this and was released earlier this year but he wasn’t allowed to be a candidate for the rebranded Batasuna party, now called Bildu. How, a political leader, who managed to bring the left wing, pro-independence to a more moderate position and managed to inspire the terrorists to lay down their weapons ended up sentenced to ten years is beyond belief.

ETA prisoners and Basque political prisoners are still spread all over Spain. It’s a strategy by the Spanish government that punishes the family members of the prisoners to endless journeys of hundreds and hundreds of kilometres to visit them. The financial cost is a huge burden to families, but even worse, many have died on the road, and often, they’re actually denied the visit and are unable to see the prisoner. This is a punishment not just for the prisoner but to all family members, who have not committed a crime.

Some of the prisoners are being held in isolation. They’re not allowed to see anyone. Ten prisoners suffering severe illness are still being held in prison, despite their illness. Again, the treatment of prisoners is anything but normal. The European courts, the UN, and Amnesty International have, for years, denounced the treatment of Basque prisoners in Spanish prisons, and the ever pervasive practise of torture. But the government simply denies that anything’s wrong and continues going through the motion.

Five years ago, after ETA’s announcement, I was happy that they had announced an indefinite ceasefire and people asked me about what would happen next. To most people’s surprise, I was sceptical of progress. I explained that ETA’s move was long overdue and I strongly believed that they would stick to it.

On the one hand they had lost so much support their position was untenable. On the other, after the spread of brutal Islamic terrorism, I believed, they had come to realise the world had changed and their actions could not continue.

So, in my view ETA and Batasuna (now Bildu) were ready to see the end of armed conflict. They had come to realise and accept that an armed struggle had lost all legitimacy (if it ever did have any legitimacy).

I was sceptical because in contrast, the Spanish government wasn’t showing any signs of readiness for peace. Although, both parties have used ETA as a way to attack the other party and gain votes, there may have been a slight possibility of a peace process with PSOE, the socialist party, in government. Yes, they were responsible for GAL, the state sponsored terrorist group, in the 80s, but I think they would have been more open to negotiations.

Instead, the political party now in government is PP, Partido Popular. This is a political party that is the direct descendant of Franco’s regime and is mired in a great number of corruption cases in the courts. A party that is anything but democratic. A party that comes from an authoritarian tradition. I was sceptical of any progress, because I knew that PP would block moves towards normalisation, any negotiations, any dialogue.

And so, five years after the ceasefire, we’re still the same. Or worse. Because time keeps marching on and there’s no willingness to end the political conflict at all. At least not in Spain.