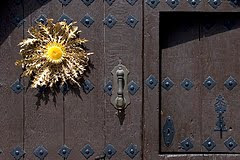 In the Basque Country, the eguzki lore can be found hanging from the main door of the traditional houses so as to protect them from evil spirits. Whilst the name of the flower translates literally as "sun flower" this is not the sun flower used for oil and seeds. A more appropriate translation would be "flower of the sun", but in English it is known as a thistle, and it grown in alpine regions.

In the Basque tradition, the house represented a sacred place where one lived in harmony with the land and the forebears. This place was protected by a constantly burning fire that lit the way for the souls of past family members and friends, by offering of food gifts to the dead, and by the eguzki lore.

The flower hanging on the wall represented the sun, but more importantly it acted as a guardian to the house. It is said that evil spirits, mainly 'lamiak' (mythological creatures with bird-like features that roamed the lands and loved stealing children from homes) were not good with numbers. When they found an eguzki lore on a door they had to count every single leave in the plant. As they struggled to count them all, and had to start counting again and again, the sun would rise from its sleep and the spirits would have to flee.

The Basque Country has been for centuries a predominantly catholic culture (although that is actually changing, and as in most of Europe, atheism is gaining ground), however, the ancient pagan traditions have lived amongst catholic belief and rituals to this day.

The eguzki lore still hangs in lots of houses in the Basque Country today.