People call them 'teddy bears' and it always leaves a bad taste in my mouth. But why I hear you ask. Well, it's because I know where the name comes from. Let me explain.

At the end of the nineteenth century and the start of the twentieth century, there was a man bent on power and war in Washington: Theodore Roosevelt. He was the head of US Department of the Navy when he forced conflict with Cuba and the Philippines. President McKinley didn't want any conflict, but Roosevelt would not have it any other way. In fact he very famously stated: "I should welcome almost any war, for I think this country needs one." 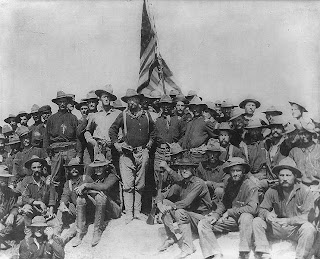 So he sent ships towards Philippines without telling the president. He also forced the situation and took the first opportunity to invade Cuba. He even quit his job in Washington, organised a group of mercenaries around him named Rough Riders, and headed to Cuba to kill those bastards by his own hand. Later, he described the day of the San Juan Hill battle as the greatest day in his life.

Roosevelt was clearly in love with war and conflict, and he wanted the United States to head into imperialist territory, proposing the annexation of Cuba and Philippines.

After McKinley was assassinated Roosevelt became president, and I must admit that as a president he did some good things: he fought corporate trusts and he was a strong supporter of conservationism.

So what's his relation with 'teddy bears'?

The name Teddy Bear comes from former United States President Theodore Roosevelt, whose nickname was "Teddy". The name originated from an incident on a bear-hunting trip in Mississippi in November 1902, to which Roosevelt was invited by Mississippi Governor Andrew H. Longino. There were several other hunters competing, and most of them had already killed an animal. A suite of Roosevelt's attendants, led by Holt Collier,[1] cornered, clubbed, and tied an American Black Bear to a willow tree after a long exhausting chase with hounds. They called Roosevelt to the site and suggested that he should shoot it. He refused to shoot the bear himself, deeming this unsportsmanlike,[2] but instructed that the bear be killed to put it out of its misery, and it became the topic of a political cartoon by Clifford Berryman in The Washington Post on November 16, 1902.[3] While the initial cartoon of an adult black bear lassoed by a white handler and a disgusted Roosevelt had symbolic overtones, later issues of that and other Berryman cartoons made the bear smaller and cuter.[4] So there you go, Roosevelt thought himself too much of a man to kill a bear that was already trapped, because he loved action and danger. If he was face to face with the bear, just the two of them he would surely have killed it with his bare hands. Anyway, he ordered the bear to be killed anyway - to put it out of its misery. What a gentleman! Here's a picture of Theodore Roosevelt with a 'teddy bear'. 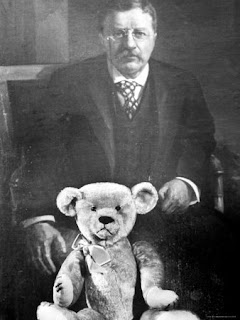 The fact that 'teddy bears' are named after him is quite ironic, a children's toy named after a man of such imperialistic dreams of grandeur, a man who rejoiced in war and killing, and a man who considered every human living in the third world as uncivilised people that could simply be crushed and used to for US interests and purposes.