History is and always has been one of my passions. Reading about the past has helped me understand where we come from, and why and how the world is today. At the same time history has always been written by the victors, never by the defeated or oppressed. This is perfectly expressed in one of Bertol Bretch's poems "Questions from a worker who reads".

Who built Thebes of the seven gates?
In the books you will find the names of kings.
Did the kings haul up the lumps of rock?
And Babylon, many times demolished
Who raised it up so many times? In what houses
of gold-glittering Lima did the builders live?
Where, the evening that the Wall of China was finished
Did the masons go? Great Rome
Is full of triumphal arches. Who erected them? Over whom
Did the Caesars triumph? Had Byzantium, much praised in song
Only palaces for its inhabitants? Even in fabled Atlantis
The night the ocean engulfed it
The drowning still bawled for their slaves.

The young Alexander conquered India.
Was he alone?
Caesar beat the Gauls.
Did he not have even a cook with him?

Philip of Spain wept when his armada
Went down. Was he the only one to weep?
Frederick the Second won the Seven Year's War.
Who else won it?

Every page a victory.
Who cooked the feast for the victors?
Every ten years a great man?
Who paid the bill?

So many reports.
So many questions.

Looking at history with critical eyes, and retelling the story from a different point of view is essential and Howard Zinn understood that. It is not about rewriting history for our own purposes but rather retelling history and filling the huge gaps that official history has left throughout time. The perfect example of this is Howard Zinn's most successful and influential book, "The People's History of the United States" where he retold the 'discovery' of America by Columbus focusing on the indigenous point of view. Where he wrote of the expansion of the settlers to the west destroying the lives of the indigenous from the natives' point of view. The struggles of black people and workers from their points of view.

Howard Zinn's parents were migrants from Europe. They worked in factories. They had very limited education. Howard lived through the great depression, and worked in the shipyards. He joined the army corps and went to Europe as a bombardier during World War II, where amongst other things he participated in the first ever use of napalm. It has often been referred to as "the good war", but he never saw it as such. At his return he put all of the medals that he had received inside an envelope and labeled the envelope: Never again.

Years after the war, and having finalised his studies as historian, he returned to some of the sites he had bombarded to do some research. What he found confirmed his deepest fears. Most of the victims of the bombings were civilians (civilian casualties in WWII have been estimated to be 50% of the total). Here's a fragment from Wikipedia.

On the ground, Zinn learned that the aerial bombing attacks—in which he participated—had killed more than 1000 French civilians as well as some German soldiers hiding near Royan to await the war's end, events that are described "in all accounts" he found as "une tragique erreur" that leveled a small but ancient city and "its population that was, at least officially, friend, not foe." In two books, The Politics of History and The Zinn Reader, Zinn described how the bombing was ordered—three weeks before the war in Europe ended—by military officials who were, in part, motivated more by the desire for career advancement than legitimate military objectives. He quotes the official history of the U.S. Army Air Forces' brief reference to the Eighth Air Force attack on Royan and also, in the same chapter, to the bombing of Pilsen in what was then Czechoslovakia. The official history stated, that the famous Skoda works in Pilsen "received 500 well-placed tons, and that "Because of a warning sent out ahead of time the workers were able to escape, except for five persons."

This marked him for the rest of his life. Howard Zinn had seen poverty, had seen the suffering of workers, he had seen the horrors of war first-hand, and now the consequences of war.

In an interview with Mark Gordon Howard Zinn talks about how unacceptable war is and how we have come to justify the unjustifiable. You can watch the video here. As a sample, here is a transcript of Howard Zinn's answer to Mark's first question: Can we ever have a just war?

I don't think so anymore. If we ever could in the past, the technology of warfare has reached a point where war is always the indiscriminate killing of huge numbers of people. Wars were at one time fought between armies, soldiers killed soldiers. Now, and we heard tonight doctor Gino Strada, the Italian war surgeon tell us, that the victims that he takes care of in the hospitals in Afghanistan and Iraq are 90% civilians, 30% of them children. In a situation like this war can not be accepted any more as a way of solving any of the problems we have in the world.

As the History teacher in the Spelman College in the 50s, a college for black women, he witnessed the beginning of the civil liberties movement and joined the sit-ins and protests, for which he was expelled from the college. 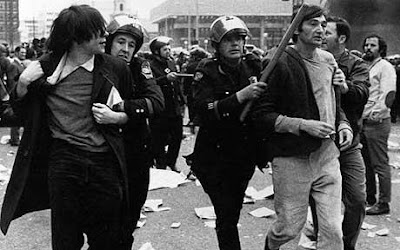 He was also one of the first intellectuals to oppose the Vietnam war (see the photo above: Howard Zinn being arrested on the right) From then on, Howard Zinn has not only been a tireless anti war activist, but also a historian who has been able to build bridges between intellectuals and the general public. His works have been read by millions of people.

Looking at the world, it is easy to despair, Howard said, but we should not, and he explained why when he was invited back to Spelman College to address the students in 2005, fifty years after he was sacked. His address was entitled Against Discouragement, and it has been widely published, you can find the address here.

The latest article that Howard Zinn wrote was recently published in The Nation, where he delivered a very sharp and critical assessment of Barack Obama's first yeas as president. He started the assessment saying:

I've been searching hard for a highlight. The only thing that comes close is some of Obama's rhetoric; I don't see any kind of a highlight in his actions and policies. As far as disappointments, I wasn't terribly disappointed because I didn't expect that much.

And he finishes the article in a typical Zinn way.

I think people are dazzled by Obama's rhetoric, and that people ought to begin to understand that Obama is going to be a mediocre president--which means, in our time, a dangerous president--unless there is some national movement to push him in a better direction.

Howard Zinn died last week. We will miss his sharp insights. His fierce activism. His messages of peace. His warnings against war. His words of encouragement and hope. But his writings will stand the test of time.
Labels: reflections