Trapped in the Twin Peaks Roadhouse

I haven’t slept well all week. My head keeps spinning. I’m preoccupied. Am I in a dream? Is it nightmare? An alternate reality? Or the actual real world? The new season of Twin Peaks came to an end, in surprising ways that opened up new questions, left a lot unanswered and offered very few answers. In true Lynchian way, dreams and nightmares, reality and other realm collided. I’m trapped in the the Twin Peaks roadhouse and I can’t get out of it.

This series took me through so many highs and lows and when I thought I understood where it was going, it surprised me once again, subverting expectations, expanding the canvas, beyond what I thought was possible. It was announced as an 18 hour movie, we talk about it as a new season of a TV series, but this was so much more than all that. David Lynch, Mark Frost and all the other co-conspirators have created a monumental piece of art that pushes the art forward just as much as the original series did. The original series was the weirdest and most challenging network TV ever produced. Twenty five years later, they’ve done it again.

I remember coming out of the theatre after watching Lost Highway. The movie had stirred so many emotions in me during the screening, the way that only David Lynch can, taking you from one extreme to another, often in the very same scene. By the end of the movie, I was exhausted. I was a mess. I was burned out. I was angry. I was frustrated. I couldn’t understand the movie and I rejected it. But then, something strange happened. I couldn’t let the movie go. I couldn’t get it out of my head. I kept thinking about it, coming up with new ways to understand it. And, I assume, that as I couldn’t go back and watch it again and again, I started constructing my own reality of Lost Highway, my own understanding, which perhaps was my own construct.

It took me a few days, perhaps a week, to finally come to terms with the fact, that Lost Highway was always intended to be interpreted in different ways. Life is like that, art is like that, it poses more questions than answers. It challenges us in surprising ways and we all come to different interpretations and understandings. I finally accepted, that Lost Highway was not meant to be understood one way or another. It was meant to be experienced. It was meant to make you feel. And your understanding of it, your interpretation of the plot, could constantly change, and that was okay.

Of course, Mulholland Drive continued along the same path and Inland Empire doubled down on it.

The new Twin Peaks not only continued the same path set by the original series and Fire Walk With Me, but it expanded the Twin Peaks universe. It opened the canvas further, not only in terms of locations, but also in terms of the spiritual and other worlds portrayed. It’s broken new ground and that’s one of the best things in it. It wasn’t content with just the Red Room, it had to also give us the Fireman, the creation of Bob through the atomic bomb, doppelgangers and tulpas. 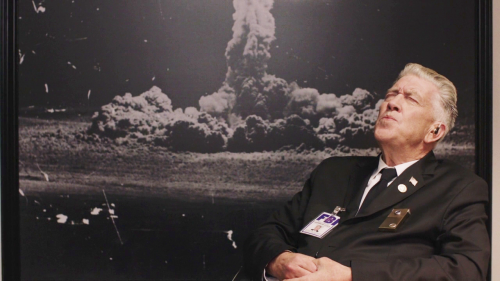 But here’s another thing that I found a really interesting thread all the way through. The new Twin Peaks felt, in many ways, like an exploration of David Lynch’s own filmography. There were echoes to his own career and the films he created. When Gordon Cole, interpreted by David Lynch himself, spoke, it often felt like a commentary on his own work and what we were seeing on screen.

The series also reflected on nostalgia. Here’s a series coming back 25 years later, and people wanted to see the old characters, see what happened to them, go back to the RR diner and spend time in the town that we all felt in love with. But Lynch and Frost didn’t give us that. Not only did we spend a lot of time in Vegas and Buckhorn and other new locations. The past is the past, time has moved on and Twin Peaks has changed. The cool, retro, goofy feel of the town is gone. This is a darker, more sombre Twin Peaks.

There’s so much more to it, like an exploration of dualities and mortality. I can’t write about everything, but I do want to touch on the two part finale.

So, after giving us the fairy tale, Frost and Lynch change tack. The finale suddenly turns and twists making us question everything that we’ve witnessed. Was it all a dream? And who was the dreamer? Us, the viewer or the creators of the story, embodied in Gordon Cole (David Lynch) who forged the whole plan?

Could Twin Peaks be a dream that is dying, coming to an end? This new reality we’re witnessing seems deserted. We hardly see any people at all. Cooper is not Cooper anymore. Even Dianne doesn’t recognise him. Laura is not Laura anymore. She doesn’t remember Twin Peaks or her father. But, traces of memory, may be there. She seems to react to her mother’s name. Reality and fiction blur once more.

Then they arrive to Twin Peaks. No one’s there. The streets are deserted. The RR diner is closed (I think that’s the first time we see it closed), all the lights off. Finally, they arrive to Laura Palmer’s house and the new Laura, now called Carrie Page, can’t remember the town, the diner, nor the house. What does all this mean? Are we in the real world?

In fact, when they knock on the door, the woman who opens the door is not Sarah Palmer. She’s not someone, we’ve ever seen in Twin Peaks before. In fact, she’s the real owner of the house that was used as the location for the Palmer family house. She bought the house, which is actually in Seattle, a few years ago, not knowing it was a location for Twin Peaks. She wasn’t a fan of the series. So, why did David Lynch, give this woman a big role in the final scene of the series? And of course, she says that this is her house, which is true, and she doesn’t know about Laura, she doesn’t know about Sarah Palmer. How would she? They’re fictitious characters, and this is her reality, her real house.

Of course, nothing is that simple. Reality and fiction blur again when she says she bought it from the Chalfonts, who are Twin Peaks characters we know and who are related to the spiritual, magical realm of the Red Room and the mythology.

At the end… we’re as disconcerted as the Cooper who is not Cooper and Laura who is not Laura. What year is this? How many years have passed? Why is Twin Peaks so deserted and dark? Why is the only place lit up, the house where Laura was abused repeatedly for years, where Sarah Palmer morphed into a bitter dark lovecraftian monster? Is Bob dead? And what about Judy? Should we continue screaming? Yes, in fact, we should. 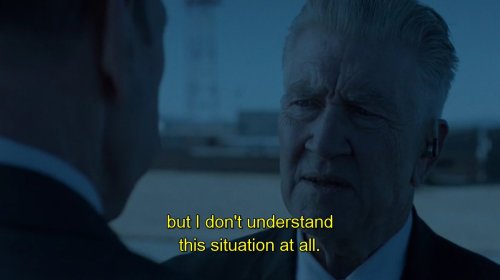 I don’t have clear answers. My understanding of the series keeps morphing and changing and that’s one of the greatest things about David Lynch and Mark Frost’s work. Gordon Cole (David Lynch) himself said it in episode 4 (see the picture above) and it’s hard to argue with him. But then again, I don’t think, that was ever the point.

Art is mean to stir emotions, to pose questions. This is David Lynch’s greatest gift. He stir emotions I’ve never felt before. He moves me deeply. And he makes me ponder so many questions. That’s why Twin Peaks: The Limited Series Event is so much more than 18 episodes of a TV series.

There’s only more thing to say… Thank you David Lynch, Mark Frost and all the other co-conspirators of this series. It was incredible. And thank you to Jeff Jensen and Darren Franich for all the podcasts.