Some notes on the Catalan referendum

The images of police brutality in Catalonia are sad and distressing but hardly surprising to anyone that knows how the Spanish state, the Spanish police and the Popular Party operate. The events of yesterday could have been avoided and would have been avoided in any country with a strong democracy. Sadly, Spain has never had a strong democratic tradition and it shows.

First some notes on history. Catalonia has a long tradition of social groups and movements, a strong sense of civics and community, and a history of libertarian anarchism and cooperatives. The Spanish Civil War and Franco’s regime attempted to kill that, but despite the monstrous purges, mass graves and repression (it should be noted that Spain has the second largest number of people disappeared after Cambodia and the Spanish government is putting every obstacle possible to excavate the mass graves), Catalan culture endured.

On the other hand, in Spain, the fascists were never defeated. Franco ruled from 1935 to 1975, with the silence and support of the international community. When Franco died, the transition to democracy was overseen by the military and the Spanish King Juan Carlos, who had been groomed by Franco from a young age to carry on when he passed away. 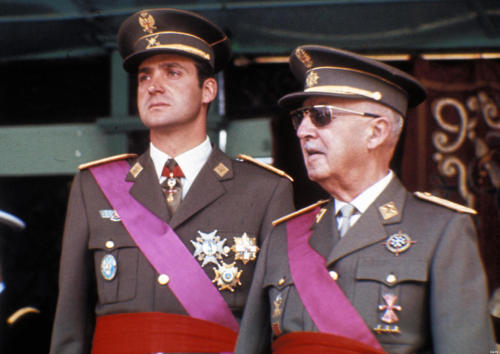 People accepted, anything in 1978, because anything was better than the fascist regime. Promises were made, to Catalonia, for more autonomy in recognition of their history, but despite there being a Catalan parliament and government, a lot of those competencies haven’t been transferred. Forty years on, it’s clear those promises will never be fulfilled. The same applies to the Basque Country, which also longs for a referendum of its own.

This is further compounded by the issue that the same people that ruled under Franco’s regime, still rule today. The IBEX 35 businesses (IBEX 35 being the 35 biggest companies in the Spanish stock exchange market) in Spain right now, are exactly the same IBEX 35 that were the main business and financial powers under Franco’s regime. 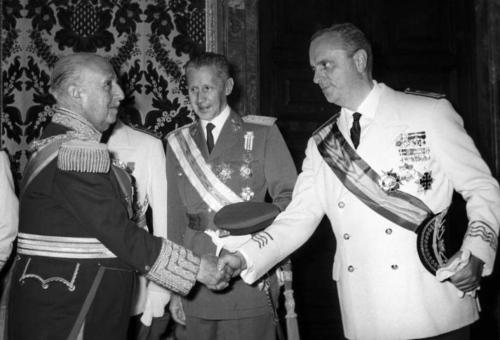 The Popular Party now in government, was founded by Manuel Fraga, who was a Minister under Franco’s regime and, most famously, Minister of Interior and in charge of the police when they attacked workers as they left a meeting inside a church in Vitoria-Gasteiz, which resulted in 5 dead and 150 wounded by gunshots. The event is known as the Massacre of Vitoria and was described as a massacre by the police involved themselves. The people in government now are the direct descendants of Franco’s regime. They are fascists trying to playing by modern European democracy standards, but fascists deep inside, and they still rule the country with the silence and support of the international community. Nothing has changed.

Yes, the repression may not be as strong as in Franco’s years, but the endemic corruption with more than 700 cases of corruption against the Popular Party (the party in government) that’s bleeding the country dry; the tight control of the public broadcaster by the government with blatant censorship and propaganda in equal measure, denounced even by workers in the public broadcaster themselves; the cases of torture in Spanish police stations and prisons that are regularly condemned by the United Nations and Amnesty International but have never been addressed by a government and a judiciary who simply shrug and say “that’s not true”, meaning “we know it happens but we don’t care and won’t implement any international measures to improve the situation.”

Spain is broken but not because a large number of Catalans and Basques want out. It’s because 40 years of dictatorship and 40+ years of so called ‘democracy’ under the rule of exactly the same political, business, financial and military, have taken their toll.

The campaign for a referendum has been brewing and growing for a number of years. This is not new. Catalan people have organised themselves in a huge movement of millions that should never have been ignored. They protested and campaigned, not just peacefully but cheerfully, in a festive fashion, demonstrating great civility and making their case respectfully. All they wanted, was a vote, the right to be heard.

An overwhelming 82% of Catalans support a referendum, which is not to say that all of them support independence. They support the right to a vote. This cannot be ignored, but the Spanish government, with no democratic tradition, set in their authoritarian ways, refused to talk and negotiate.

It’s important to note the stern warning by United Nations experts a few days ago:

“The measures we are witnessing are worrying because they appear to violate fundamental individual rights, cutting off public information and the possibility of debate at a critical moment for Spain’s democracy.”

On 21 September, more than 4,000 police officers were deployed to the autonomous region, with an order from the Government to “act in case the illegal referendum takes place”.

“We are concerned that this order and the accompanying rhetoric may heighten tensions and social unrest,” the experts said.

“We urge all parties to exercise the utmost restraint and avoid violence of any kind to ensure peaceful protests in the coming days”, they concluded.

Alfred Zayas, one of the UN experts responsible for the warning went even further in an interview when he was asked about the fact that the Spanish constitution makes the referendum illegal.

But a government, a power without legitimacy always responds with violence and aggression. This is how the Spanish government chose to respond. Closing all possibilities of dialogue, they chose the baton and rubber bullets (which by the way, are banned by Catalan law - there’s an irony there, the Spanish police attacking Catalan citizens with votes that are deemed illegal in by the Spanish courts, shooting rubber bullets that are banned by Catalan law).

It was their choice. They could have chosen to let the vote happen and question its validity, but instead they tried to set an example the only way fascists and authoritarians know, exercising extreme political and police brutal force on peaceful citizens. Suspending Catalan autonomy. Taking over their finances and police force. Brutally attacking peaceful voters, elders and firefighters. Beating up Catalan firefighters who were attempting to protect voters and provoking fights with the Catalan police force. Grabbing people and tossing them down the stairs like garbage.

Regardless of the result, one thing is clear, the civility shown by Catalans is an example. Their campaign was a shining example of citizenship, a social movement that was strong in its arguments and respectful, in contrast to a Spanish government that used every blunt tool of oppression and aggression.

The voting stations were peaceful and in a cheerful positive mood until the Spanish police arrived ten minutes before the polls opened. The police brutality must be condemned in the strongest of terms. Their use of extreme force on the elderly, children and peaceful citizens must be condemned. 761 injured and hospitalised to close around 90 polling stations out of more than 2,000. That was their choice.

And, now, the day after, I choose to highlight something else.

The shining examples of civility shown by the Catalan people who have endured all this with humour, creativity and a positive attitude. The images of people holding or raising their hands and singing as the Spanish police raided the polling station.

The images of elderly people who suffered the civil war, concentration camps and oppression, being given access to the voting stations first. People applauding as they exercised their vote and the emotional embraces of people, who longed for this to happen for so long and did not honestly believe it would happen in their lifetime.

The courage shown by Catalan citizens who voted and stayed at the polling stations to protect them from the police. Who faced brutal violence and yet stood peacefully. And the ultimate courage and determination of the woman thrown down the stairs by the police, who left the hospital in the afternoon with a neck brace and went back to a polling station in order to vote.

That’s the kind of courage and determination that defines this Catalan movement.

Whatever happens now. One thing is clear, political issues and struggles are not solved with violence and brutality, they only strengthen the resolve of the citizens. Let’s hope that the international community stops looking the other way and ensures a referendum with all the guarantees and protections as Catalans have been asking for so long.

The right to vote, to decide your own future is an inalienable right and the overwhelming 82% of Catalans who are calling for a free vote must be heard.

No more excuses. No more violence of the state.