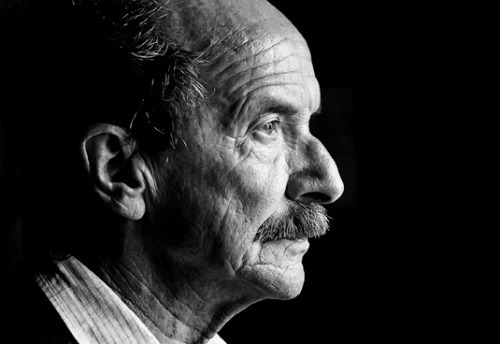 One of the greatest poets and wordsmiths in the Basque language is gone, but he is not gone, he lives within us.

An old sage who said:

And the Basque language reawakened with a new conscience.

Having a drink in a bar with a friend, he wrote in a napkin:

If I had cut off its wings

the bird would’ve been mine,

it wouldn’t have escaped.

it wouldn’t be a bird anymore

and I, I loved the bird.

His friend gave those words music and the song became a hymn, an anthem, a song that united us all in the Basque Country, a longing for freedom and to just be, as we were, as we are, without clipped wings.

But his concerns were for all humanity, he wrote on First Notes of A March:

The sun melts down the snow at the high peaks,

and it descends down the slope in a powerful stream.

In ourselves is the sun, the darkness, the ice,

the light that scrapes, the heart that melts.

With heart and passion, open hands and arms,

let’s enlighten ourselves and see the truth.

Treading each our own path, between all of us

opening the way for our humanity.

No one subjugated by another, all standing on our own,

all people together in one, we will have our future.

As long as there’s someone hungry we won’t be satisfied.

As long as there’s someone oppressed we won’t be free.

And wise old man that he was, he said long ago:

Though I know death will come for me

I will not yield from fighting it

with all my heart.

It won’t get me unaware!

And while I live I’ll sing for life.

And if I die before my time comes,

the last cry in my lips shall be

The first smile to blossom in someone else’s.

In more recent years, he said:

I'm leaving but I'm not leaving.

I'm with you, we'll be together.

We must leave, if we are to return again.

Sadly, his poetry is so philosophical and so embedded to the sounds and rhythms of the basque language that his most brilliant works are impossible to translate to any other language. The meaning would be there, but the musicality, the sounds, the tones, the rhythms, would be completely gone.

Artze’s gone, but his words, his art, his voice will live on.

I leave you with the improvisation Iñaki Salvador (a Basque jazz pianist and long time Mikel Laboa collaborator) has recorded after the news of Artze’s death.